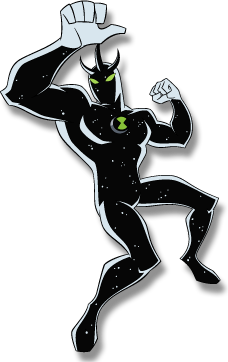 Alien X is known as Ben's strongest alien from a race of beings described as omnipotent by many greatly intelligent beings in the show and by the creator himself ben ones used this Alien to create the universe after it was destroyed ben later went to court for this do to the multivere preservation act.

Age: Unknown (Existed prior to Ben having the Omnitrix)

Attack Potency: High Multiverse level+ (Surperior to the Contemelia where mere fraction of his DNA was able to pierce through the extra dimensional barrier where the Contemelia (a group of 5th Dimensional Beings) said it was "impossible to breach")

Speed: Infinite (Celestialsapiens are born in and live in the Forge of Creation, a place where time does not exist)

Durability: High Multiverse level+ (Took hits from Galactic Gladiator, another Celestialsapien who should be about equal to Alien X and unfazed when piercing through the higher dimensional barrier)

Intelligence: Very high, but not useful in combat situations, as clash between multiple personalities prevents utilization of the intelligence. This isn't a weakness in Ben 10 Omniverse as Ben actively gets them to work with him. | Nigh-Omniscience could theoretically use there power to become nigh omniscience as they could re-create the universe almost down to the smallest detail.

Weaknesses: Alien X needs to wait for the different personalities to agree to do anything, but Ben can convince them to work with him in Ben 10 Omniverse.

Note 2: While there are statements of being higher dimensions within the verse, it is unclear as to whether or not the verse means "higher dimensions" in the traditional sense, or if it simply refers to other realms; furthermore, it remains unclear if the verse's weapons are able to affect said higher dimensions at all. Based on this, the premise of 1-B Ben Ten has, for now, been rejected.

Retrieved from "https://vsdebating.fandom.com/wiki/Alien_X?oldid=25102"
Community content is available under CC-BY-SA unless otherwise noted.