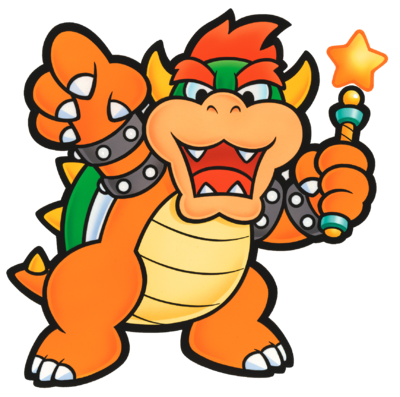 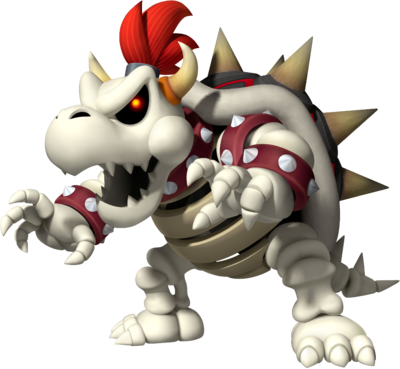 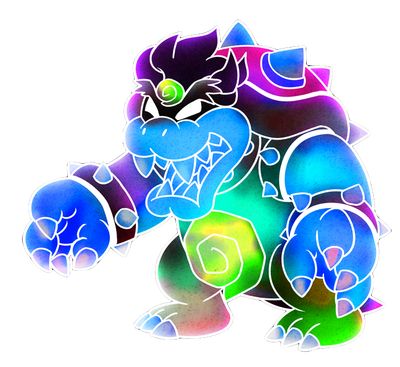 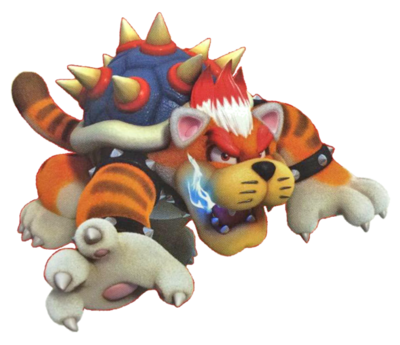 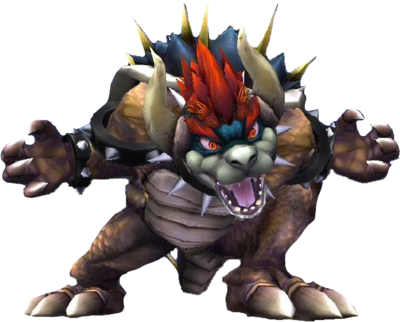 Bowser, sometimes known as King Koopa (Japanese: 大魔王クッパ, Daimaō Kuppa or "Great Demon King Koopa"), is the main antagonist of the Mario series and the King of the Koopas. He has repeatedly kidnapped or attempted to kidnap Princess Peach and take over the Mushroom Kingdom. He has also attempted to conquer other lands, such as the Mushroom World, Dinosaur Land, Sprixie Kingdom, and even the entire universe. Despite his villainous nature, he has occasionally helped the heroes of the Mushroom Kingdom against common threats and participates with them in their numerous sporting events in spin-off games.

Since his debut, Bowser has been in nearly every Mario game, including the main series, spin-offs, and crossovers. Due to his role as the primary villain of the Mario series, he is mostly the final or penultimate boss in his appearances, if not as the main antagonist (an example being Mario & Luigi: Superstar Saga). In the Mario RPGs, Bowser is generally cast as an antihero or a minor villain, with the exception of Paper Mario, Paper Mario: Sticker Star, Mario & Luigi: Dream Team, and Mario & Luigi: Paper Jam.

Age: At least a thousand years

Superhuman Physical Characteristics, Immortality (Types 2 and 3, can survive and function even when reduced to a skeleton or losing his entire physical form), Regeneration (Low-Godly, his entire physical body destroyed in Yoshis New Island and reduced to some form of star energy but still appears in later games just fine, although it's unknown if he regenerated his body himself), Longevity (It was stated that he would be capable of ruling the universe for 10,000 years), Skilled Hand-to-Hand Combatant, Weapon Mastery, Vehicular Mastery, Natural Weaponry, Fourth Wall Awareness, Minor Toon Force, Genius Intelligence, Large Size (Occasionally Type 0 normally, Types 1 to 2 in his giant form), Black Magic, Acausality (Type 1, can interact with and attack his baby self with no repercussions), Breath Attack, Fire Manipulation (Including homing fireballs, intangible fireballs, and magma fireballs), Earth Manipulation, Magma Manipulation, Electricity Manipulation, Air Manipulation, Weather Manipulation, Acrobatics (Enhanced Condition and Mid-Air Jump, can eaisly leap several dozen to hundreds of feet into the air, perform acrobatic flips, and can mimic Yoshis Flutter Jump to keep himself in the air), Flight, Non-Physical Interaction (Can attack boos, and his attacks could harm and destroy the soul of the Elder Princess Shroob), Attack Reflection, Summoning, Teleportation, Telekinesis, Telepathy (Can communicate with people from across dimensions), Extrasensory Perception and Clairvoyance (Was able to sense and watch Mario entering Peachs castle despite being in another dimension, and could sense his targets location in his tower and watch their battles with his minions), Dimensional Travel, Time Travel (Was able to warp through space and time decades into the past), Energy Manipulation, Energy Projection, Size Manipulation (He can shrink his targets to cellular size and alter his own size to gigantic proportions), Poison Manipulation (He can create a thick fog of poison around his opponent, his claws and teeth are naturally poisonous), Darkness Manipulation, Curse Manipulation, Body Control (Able to control the spikes on his shell, he can also turn his shell into ball that ye can contort into, and he can control his head even when it's not attached to his body), Body Puppetry (He can forcibly control his targets movement), Surface Scaling, Rage Power, He can exist and act as a mass of intangible star energy, BFR (He can forcibly bring his targets with him to various locations and inhale them into his body), Power Nullification (He can negate his opponents ability to attack or use items by stomping them, also via scaling to Bowser X who can suck attack icons, preventing Mario & Luigi to use their respective moves), Shockwave Generation, Transmutation (Turned most of the Toads in the Mushroom Kingdom into stone blocks, bricks, and plants, turned a Koopa Troopa into a frog, was converting all the beings inside the castles paintings into subservient monsters, and turned all the Egglings living in Eggland into apples), Sealing (Trapped almost everyone in Peachs castle in the walls and paintings and sealed most of the doors in the castle, sealed Princess Peach away with a seal so powerful 70 Power Stars and the giant Power Star Bowser had was needed to free her), Fusionism (Merged several Bowser Dice Blocks into a single Super Bowser Dice Block), Creation (Created a 30 floor tower and an island with his magic), Afterimage Creation, Forcefield Creation, Weapon Creation, Portal Creation, Illusion Creation (Able to create physical illusionary copies of his hat that can damage his opponent, and created a fake painting of Princess Peach that turns into a painting of himself when Mario gets closer), Black Hole Creation, Transformation (Can turn his body into metal), Paralysis Inducement, Fear Inducement, Statistics Reduction (Able to cut his opponents strength and defence in half), Statistics Amplification / Self-Perception Manipulation (He can slow down his perception of time to the point of making everything around him seem stopped in time), Matter Manipulation (Could gather and control cosmic matter to form a boulder around his body), Plot Manipulation (Forcibly added himself and Kammy Koopa into the story of Paper Mario in order to steal the Star Rod and channged the story while doing so), Gravity Manipulation (Able to alter his own and Marios gravitational fields to fling himself and Mario to various planetoids), Spatial Manipulation (Turned a small flight of stairs into an "endless" distance that kept anyone stuck at the bottom no matter how long they ran up the stairs by creating a spatial loop), Life-Force Absorption (He can absorb large amounts of his targets life force to heal himself), Corruption (Type 3, was going to corrupt all the good dream worlds created by the Dream Depot and twist them to make his own dreams come true), Reality Warping and Pocket Reality Manipulation (Was able to turn Yoshis Island into a storybook dimension). With the Koopa Clown Car he has Spaceflight, Petrification and Light Manipulation (Can unleash a large flash of light that turns anyone caught in it to stone).

Resistance to Extreme Heat and Cold (On several occasions he has casually walked in lava, was sent flying into his artifical sun while being set on fire and resurfaced just a few minutes later completely unburned, was unbothered by setting himself on fire, and he has flown across the vacuum of space while not even remotely affected by the extreme cold), Radiations (Unaffected by the radiations of space and black holes, and has casually sat in a hot tub full of toxic waste), Darkness Manipulation, Air Manipulation (Could resist and fight within Dark Bowsers vortex which was a massive tornado made up of dark energy) Transmutation (He can still fight when turned into a scarecrow, and only takes damage from the Golden Flower as opposed to being turned into coins), Black Holes, Gravity Manipulation (Outran, withstood, and escaped black holes from Super Peach's Castle of Fury several times during their fight, he is also able to stand or float near them without threat of being dragged in by their gravitational force), Soul Manipulation / Sealing (Unaffected by Catch Cards which can take and seal away not only a persons soul but also their whole body), Sleep Inducement (Can look at Sleepy Sheeps without falling asleep), Mind Manipulation, Possession (He can resist the effects of Lucien, remaining mostly in control of himself and using Luciens power for his own goals even after Lucien regained his full power, couldn't be possessed by the Elder Princess Shroob, able to remain in control of himself when Dimentio tries to use his mind control stalks on him, and upscales from the Koopalings who were unaffected by Fawfuls inital mind control gas due to being a more elite Koopa than they are), and Void Manipulation/Existence Erasure (Able to resist the effects of Count Bleck and Dimentio using the Void, wasn't erased with the Sammer Kingdom when the Void consumed it, and was able to enter and leave the empty void left behind by it's destruction, he can swim in the River Twigz which ends the aftergames of the ghosts living in the Underwhere, and he can survive inside Count Blecks castle which is located inside the Void)

Alongside his standard abilities he gains Statistics Amplification (Able to make himself significantly stronger to the point of causally curbstomping Mario), Invulnerability (Able to make himself imperious to damage), Healing, Biological Manipulation, Life Manipulation (Removed Tubba Blubbas heart and from his body and gave it sentience while allowing Tubbas body to still function), and Enhanced Reality Warping (The Star Rod can grant it's users wishes). Resistance to Sleep Inducement and Time Stop (While amping himself with the Star Rod he laughs off any and all attempts Mario makes using the Star Spirits abilities, including Mamars Lullaby and Klevars Time Out abilities which put people to sleep and time stops them respectively)

Alongside his standard abilities he gains Large Size (Type 0), Self-Sustenance (Type 3) Healing, Duplication, Absorption (Can passively absorb dream energy from anyone who is sleeping), Soul Manipulation and Sleep Manipulation (Antasma was able to trap 50 Pi'illos in an enternal slumber and keep their souls trapped in Nightmare Chunks with just a fraction of the Dark Stones power, the Dream Stone being its counterpart should be capable of the same), Life Manipulation, Dream Manipulation (Has power over dreams and can manipulate all dream worlds, able to make dreams become reality), and Existence Erasure (Was going to erase Mario and Luigi from existence before the Dream Stone was shattered)

Alongside his standard abilities he gains Healing, Enhanced Power Nullification (Can nullify and reverse the effects of the Void, able to bypass the barriers and Invulnerability of Super Dimentio), Empowerment (From positive emotions like love), and Resurrection (Can bring back anyone erased by the Void)

Attack Potency: Multi-Solar System level (Insert reasonings for tier depending on the results of the CRT), up to Universe level+ with Preparation (Was going to destroy the very fabric of the universe and remake it via his Galaxy Reactor had he not been stopped by Mario and lost his Grand Star), several of his abilities ignore durability | Multiverse level+ (Far stronger than before thanks to the Star Rod, could causally stomp base Mario and even one shot him, and is stronger than the 7 Star Spirits who created many dream universes and scales to the Dream Depot, which is this powerful) | Universe level+ (Empowered by a Grand Star which is not only vastly superior to Power Stars, but is also the source of power that he was going to use to destroy and remake the universe during the events of the first Super Mario Galaxy game), several of his abilities ignore durability | Multiverse level+ (Empowered by the Dream Stone, which is made up of and controls innumerable dream worlds created by various species with each dream being it's own universe or sometimes a cluster of universes as shown when the Zeekeeper flew through several of them in a single dream), several of his abilities ignore durability | Multiverse level+ (Empowered by the Pure Hearts which serve as the counterpart to the Chaos Heart, alongside Mario and Peach he fought and defeated Super Dimentio, also being the one who could deal the most damage to him)

Intelligence: Smart at times, but has moments of stupidity

Weaknesses: Sometimes lets his anger get the better of him

Note 1: He should be comparable to Dark Bowser who was going to blow up all the kingdoms with his magic.

Note 2: And his TK is in the megaton range.

Retrieved from "https://vsdebating.fandom.com/wiki/Bowser?oldid=28699"
Community content is available under CC-BY-SA unless otherwise noted.