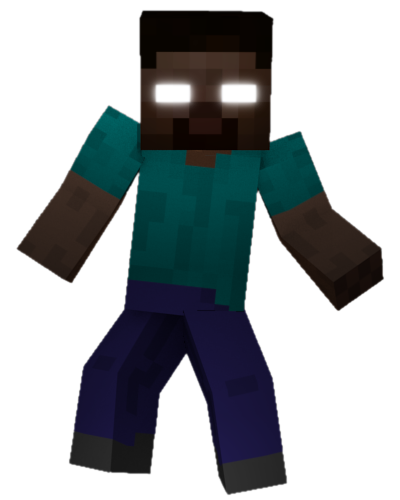 Herobrine is a paranormal entity found in the game of Minecraft with very questionable origins. Based on what little canon can clearly be found, it is known that Herobrine is meant to be an aspect of Notch's brother, the creator of the Minecraft world. That said, his known use of the term wake up implies an affiliation with the two entity's in the end credits who clam they are all things including the player and are from a place which very name is Beyond human comprehension.

Name: Herobrine, the devil of Minecraft

Durability: Unknown | Unknown, at least Large Mountain level (Capable of surviving a literal endless attack from Steve with no apparent wounds, capable of returning immediately after to fight again)

Stamina: High, can fight for days on end with no rest and through major wounds

Range: Dozens of meters with bows and magic

Intelligence Probably Above Average, created the world along with Notch

Zombies: Herobrine summons a small horde of zombies to assault the enemy.

Dream Warp: Herobrine alters the dreams of the user; typically this will result in their teleportation to his "world", a sub-dimension containing vast dungeons guarded by monsters and himself.

Note: As there are an endless amount of interpretations of the Herobrine, we have used the most widely recognized and most canonical forms we could find; if you would like to make a change to this page, refer to Mr. Bambu.

Jack Noir (Homestuck), Jack's Profile (True Form Herobrine and Jackspers Noirlecrow were used, Speed was equalized and both were bloodlusted)