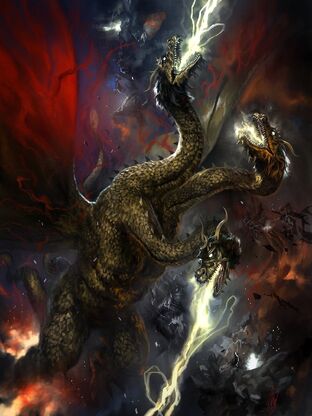 In the Showa series, King Ghidorah is an alien dragon said to have attacked Venus under his own power many thousands of years ago, wiping out the planet's entire civilization. He later attacked Earth but was repelled by Earth's monsters Godzilla, Rodan and Mothra.

In Godzilla vs. King Ghidorah, King Ghidorah is part of a scheme by time-traveling terrorists known as the Futurians to destroy Japan in the past to prevent it from becoming a global economic superpower. He is the result of the Futurians placing three genetically-engineered creatures from the future called Dorats on Lagos Island in the year 1944. In 1954, the Dorats were exposed to the Castle Bravo hydrogen bomb test conducted at nearby Bikini Atoll, which caused them to merge and mutate into King Ghidorah.

After defeating King Ghidorah and sending it to the depths of the sea, Godzilla began to wreck havoc throughout Japan. Emmy Kano, a Futurian who rebelled against her crew, and M11, her android, were asked if King Ghidorah could be revived in the 23rd century. If possible, he could be brought back to the present and used as an anti-Godzilla weapon to protect Japan. Emmy and M11 agreed and went to the future using the time machine KIDS.

In Godzilla, Mothra and King Ghidorah: Giant Monsters All-Out Attack, King Ghidorah is reinvented as a heroic monster for the first, and so far only, time. In this film, King Ghidorah is the God of the Sky and one of the three Guardian Monsters, along with Mothra and Baragon. An ancient Yamata no Orochi, an eight-headed dragon from Japanese mythology, King Ghidorah was slain by Japanese warriors thousands of years ago and laid to rest underneath Mount Fuji. The warriors prayed for King Ghidorah's soul, and over the next several centuries he slowly regenerated, empowered by the souls of Japan's honorable dead. However, he was awakened before he could grow back all eight of his heads, instead of growing only three.

In Godzilla: Planet Eater, King Ghidorah is part of a race of golden three-headed dragons that inhabits higher dimensions, Ghidorah has used supergravity to consume countless worlds throughout the millennia. 100,000 years ago, Ghidorah destroyed the planet Exifcalus, while the surviving members of the native Exif race took to the stars to find new worlds and appease their God. With each new world, the Exif found and converted to their faith, Ghidorah was fed a new planet.

All previous, with enhanced Superhuman Physical Characteristics, Enhanced Senses, Large Size (Type 3), Immortality (Type 1), Higher-Dimensional Existence (King Ghidorah himself is a higher-dimensional entity capable of interacting with lower dimensional planes through the assistance of the Exif), Intangibility (Due to its higher dimensional physiology, King Ghidorah cannot be physically interacted with unless its Exif guide is incapacitated or killed), Non-Corporeal (Ghidorah's body is made of pure energy with no true physical form), Reality Warping (Ghidorah's mere presence causes reality to erode), Animated Shadow (Able to interact with the physical world without entering it itself by controlling shadows, and can attack and kill things by attacking their shadows), Portal Creation (Able to create portals that allow him to travel from higher to lower spatial dimensions. These portals are described as Black Holes), Gravity Manipulation (His mere presence causes severe gravitational distortion, to the point that creatures as heavy as Godzilla Earth can float in mid-air), Spatial Manipulation (His presence alone breaks down and distorts space), Time Manipulation (His presence alone distorts and breaks down time, including causing time loops and causing time to flow out of order), Weather Manipulation (Able to cause powerful storms with his gravitational field alone), Flight, Electricity Manipulation (Able to discharge electrical energy through his bite), Body Control (Able to extend his necks to a length of several kilometers), Attack Reflection (Able to redirect and deflect attacks by bending space around himself), Energy Manipulation and Absorption (Absorbed the heat of Scarlet Godzilla and drained it to the point that its overall body temperature dropped below 32 F despite it constantly vibrating its molecules to increase its body temperature), Resistance to Black Holes (Unaffected by using a black hole as a portal)

Attack Potency: Large Planet level (Fought against Godzilla from the "Newgin Pachiko Trilogy", who obliterated a meteorite with his Atomic Breath. He also fought against Godzilla from "Godzilla in Hell", who managed to blow up the Earth and the Moon alongside SpaceGodzilla) | High Universe level, possibly Universe level+ (Stated to be a higher-dimensional being, unbound by the laws of the physical universe as it comes from a higher dimension, whose true form is undetectable by 3-Dimensional analytical equipment, with the only means of measuring it being the intense gravity it gives off. Its mere presence causes time to distort and flow out of order)

Speed: Massively FTL+ (Traveled from the Space Hunter M Nebula to Earth within minutes more than once) | At least Massively FTL+ (Shouldn't be any slower), possibly Immeasurable

Lifting Strength: Class M+ (Superior to Godzilla, who lifted and threw kaiju his own weight, threw Anguirus who weighs as much as himself) | Unknown

Intelligence: Gifted. Ghidorah has the capacity to communicate with Exif clergy through a technology called Gematron calculation which carries out complex mathematical calculations. He can also develop human activities in Godzillaland

Retrieved from "https://vsdebating.fandom.com/wiki/King_Ghidorah_(Composite)?oldid=24056"
Community content is available under CC-BY-SA unless otherwise noted.