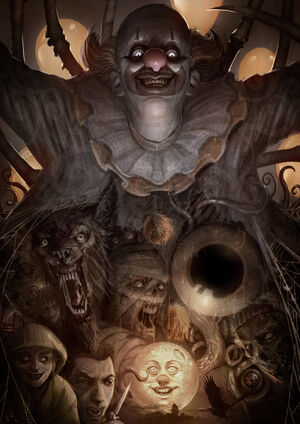 It (sometimes capitalized as IT), more commonly known as Pennywise the Dancing Clown, was the main antagonist of the novel and the film of the same name. It was portrayed to be a shapeshifting and malevolent entity millions (possibly billions) of years old, and with no exact gender or solid identity; thus why it is called "IT".

It was a mysterious evil being from an unknown realm/dimension outside the regions of space. When It came to planet Earth to feed, It's favorite disguise was that of a colorful and wisecracking circus clown named "Pennywise". It could also morph into any other being or thing it pleased, generally based on its target's loved ones or friends to lure them into traps or simply appear to them as their very worst fears and nightmares.

It preferred to attract children, so it could capture and kill to devour them. It was capable of killing every kind of human but mostly preferred to prey upon innocent human children because they were easier to manipulate and scare. According to the creature, frightened flesh tastes better.

Gender: His main avatar is male, but IT’s true form is called a female

Superhuman Physical Characteristics, Reality Warping, Immortality (Types 3 and 9), Regeneration (Low-High), Shapeshifting, Invisibility, Illusion Creation, Teleportation, Telepathy, Mind Manipulation, Spatial Manipulation, Biological Manipulation and Disease Manipulation (Stated that it could point at victims and grant them diseases, as well as make a person's tongue run with pus in the same manner), Blood Manipulation, Possession, Weather Manipulation, Technological Manipulation (Can turn on lights and switch on devices such as televisions without being in the same room as them. Far superior to other psychics who are capable of tricking video surveillance devices, causing highly advanced computer technology to critically fail, and fooling telemetry specifically designed to monitor and detect any and all psychic output.) Madness Manipulation (Type 3; Can show a victim its true form in the Deadlights by making eye-contact.), Acausality (Type 4), Perception Manipulation (Can make itself perceived differently by different people at the same time), Immersion (Appeared inside of a television, holding the severed head of a TV actor.)

Immortality (Type 10), Regeneration (True-Godly), Non-Corporeal, Beyond-Dimensional Existence (Type 2), Large Size (Type 11), Transduality, Madness Manipulation (Type 3; A single glance at its true form drives victims so insane that they suffer an instantaneous death. One particular victim experienced such an extreme reaction that spurts of blood discharged from his brain when he died), Absorption (Can make things permanently part of the Deadlights), Soul Manipulation (Keeps the souls of all it has killed in the Deadlights. Pulled Bill's mind and soul out of the universe and dragged it towards its true form.)

Attack Potency: Wall level (Even the weakest avatars can tear apart humans with ease) to Town level (Created a raging hurricane. IT in its frustration at being wounded lashes out by blowing up the sewers, stores, and transformer boxes as well killing many people). Strongest avatars are Large Mountain level+ (IT’s death was able to cause this amount of energy. IT came down in a cataclysmic meteor impact that settled on what would be Derry) | Outerverse level (Exists outside of the Dark Tower in a void beyond that which Maturin resides in; Maturin himself exists in a void which lacks physicality/direction, and predates both the concept of time and the multiverse's existence as a whole.)

Speed: Superhuman (As fast as a express train) | Omnipresent (Exists within and encompasses the Deadlights, a parallel universe)

Durability: Unknown, Regeneration makes him hard to kill | Outerverse level (IT is the natural enemy of Maturin)

Weaknesses: Underestimates and scorns all of mankind. It is sensitive to psychic energy, so collective belief and courage can overcome it. The novel also states that when It transforms into a shape, It must obey the laws of that form. It goes into hibernation for approximately 30 years between killing cycles.

Note: Not to be confused with the movie version and should be treated as different characters.

Retrieved from "https://vsdebating.fandom.com/wiki/Pennywise?oldid=27556"
Community content is available under CC-BY-SA unless otherwise noted.