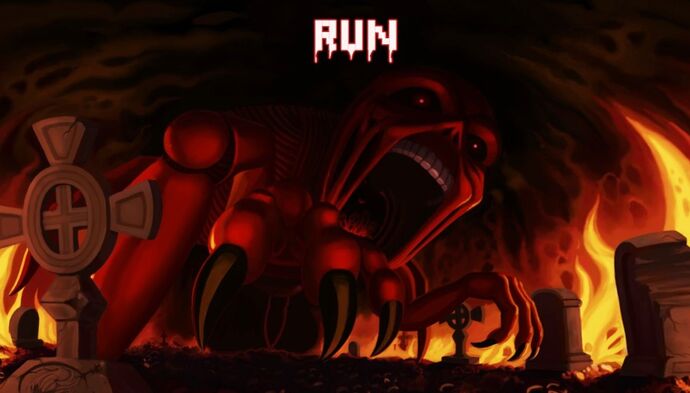 Red (or Shadow of Red, as he is referred to after his defeat) is an enormous Kaiju monster found in both Kaiju Combat games and its original home of the NES Godzilla Creepypasta thread, where it appeared in many screenshots taken from the game depicting an enormous entity (well over the size of Godzilla) hunting the player in various levels.

After its epic battle with Solomon in hell, Red and Solomon were scattered across the universe. The side effect of this causes reincarnations of Red to appear throughout the world. It is known that Red himself can never be killed , as his floating conscious is now an abstract idea appearing in our Universe to represent malignancy.

Name: Red, Emissary of the Dark, Shadow of Red

Powers and Abilities: Superhuman Physical Characteristics, Expert in Close Combat, Multitude of natural weapons (claws, prehensile stinger, etc), Breath Attack, Fire Manipulation, Soul Manipulation (Can torture the soul of Melissa), Immortality (Types 1, 3, and possibly 5), Fourth Wall Awareness, Flight, Body Control (capable of forming weapons out of its intestines that can smash through walls the size of city blocks easily), Transformation (On his Final Form), Large Size (Type 1, Type 3 in his final form), Summoning ( Can summon other minor demons as seen on Zenith), Size Manipulation (capable of shrinking enemies), Reality Warping, Telepathy and likely other psychic powers, Mind Control (Lead Melissa to the suicide), Possession (possesses the NES Godzilla game, does not come up in combat), Regeneration (At least Low-Mid), Life Manipulation (Created monsters by using the corpses of another ones), Necromancy, Teleportation and BFR (Send Solomon to another part of Zenith), Sealing (Sealed Acacius), Destruction (Destroyed the graveyard), Technological Manipulation, Pain Manipulation and Paralysis Inducement, One Hit Kill, Life Support (Can breath underwater), Creation (Creates mines that fell down in his battle)

Attack Potency: Moon Level (Immensely more powerful than the Moon Beast, who broke out from and destroyed a moon orbiting Entropy, leagues above the amalgamation of boss kaiju on Extus, and ate Mothra), likely exponentially higher (one fight with Solomon left his immortal spirit scattered across the universe), Planet Level via Reality Warping (Was able to create entire planets with his powers such Zenith and is able to warp it at will, like create a entire stage with the word "KILL" or glitch monsters in the game, even the smiley face, warp the entire screen of the game, and many more things like create an entire flesh stage), bypass conventional durability with his powers. | Small Planet Level (Is shown with a MUCH larger form, much more health bars, etc), Planet Level via Reality Warping, possibly Universe level+ (Was going to destroy the entire universe in the game was in before Melissa stepped in), bypass conventional durability with his powers.

Speed: At least FTL+ (flew across the Solar System from planet to planet nearly instantly) | FTL+

Durability: Moon level (Can face characters like Godzilla or Mothra of the NES, and the last one was able to defeat the Moon Beast) | Small Planet level (Unfathomably more powerful than before, effortsely defeat Godzilla, Mothra, Anguirus and Solomon), possibly Universe level+ (Was going to survive the destruction of the entire universe in the game was in before Melissa stepped in)

Range: At least one kilometer with most attacks (including physical), Unknown with ranged (typically a melee fighter), Planetary with his powers, likely Multi-Universal with some haxs (Can affect Zachary from his own dimension) | Likely higher (longer limbs)

Weaknesses: While he is a powerful entity, Red clearly has issues with his sadistic side; this said, he will often waste time to torture enemies he particularly dislikes. Additionally, he will gloat and make menacing faces to scare people often rather than actually fighting, so a fear-immune enemy has a major advantage. Finally, Red seems to have no extremely long range attacks (the longest seems to be, arguably, the needle gun fire). Requires energy to deliver his more powerful attacks; typically blows through energy to ensure the death of his first opponent, meaning he is much deadlier against one opponent than showed here, but much weaker against a group attacking at different times (needs recharge in between fights, weak to enemies who can outlast his energy).