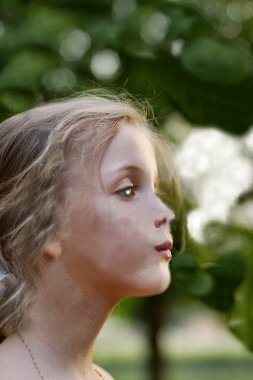 SCP-239 is, put simply, a small, eight year old girl with the ability to alter reality to match her expectations. "If she can see it, she can change it." Her reality warping powers have been shown to be among the most powerful in the hyperverse of the SCP Foundation, and has been taught the "Ways" by SCP-343.

Name: SCP-239, The Witch Child, The Woman With Stars in her Eyes

Age: Eight | Irrelevant (time and space have no meaning to her, and infinite time can pass in a matter of moments)

Attack Potency: Low Outerverse level (Capable of manipulating the Ways, and battling the Neverwere, beings who have the powers of a Damaged Way. A "Way" is an immeasurably complex dimensional construct, which should place it above the Foundation narrative, including uncountable infinite dimensions, and infinite higher narratives, which each narrative seeing the one below as nothing but fiction.) | Low Outerverse level (Was taught by SCP-343 to manipulate the Ways.)

Stamina: Average to Low, much Higher with a Foci (a focus is used to increase her stamina regarding her abilities- without one, she can use her powers, but much less efficiently) | Infinite

Standard Equipment: Foci, Spellbook (does not need this to access her powers) | None notable

Intelligence: Extraordinary Genius, despite having the mentality of a child she was able to force a being that could not possibly exist (Neverwere) to exist, which is by literally every means impossible, including by reality warping | Omniscient

Weaknesses: Naive, certain Power Nullification weapons and items can completely negate some of her abilities (including her Invulnerability to physical damage), without a Foci she is unable to continue usage of her abilities | None