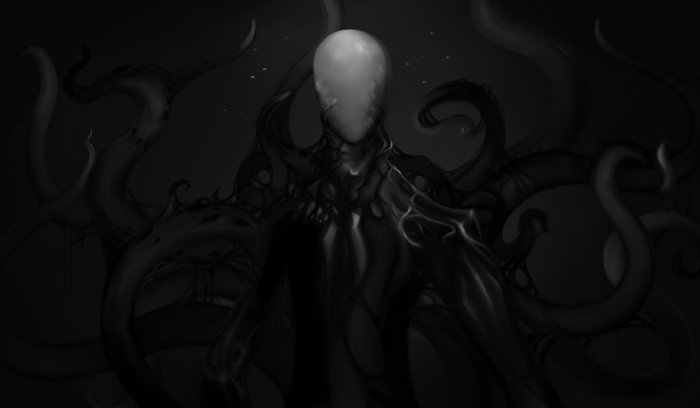 Slenderman, often referred to as Slender, The Slenderman, The Tall Man, The Operator, etc, is a mythical creature created by Eric Knudsen (AKA Victor Surge) to help support the Creepypasta community; since then it has gained world wide renown and has been the subject of countless photo edits, dozens of games, several movies, and even documentaries on the subject of his existence (notably based on similar myths aged at around 11,000 years old).

Due to the varying nature of his stats, he will be included with several forms.

Tier: Varies between 9-B, 7-B and High 3-A, At Least 2-B with dimensional bleeding

Gender: Genderless, appears as a male

Age: At least 11,000 years based on human mythology on him

Powers and Abilities: Superhuman Physical Characteristics, Flight and Levitation, Teleportation, Mind Manipulation (Proximity to the Slender Man is often said to trigger a "Slender sickness"; a rapid onset of paranoia, nightmares and delusions, capable of turning people into his servants/“proxies”), Limited Technological Manipulation (Distorts any technology within its proximity), Body Control (Able to stretch its limbs and torso), Size Manipulation, Fear Aura, Possession/Mind Control, Invisibility, Radiation Manipulation (Specifically Sigma Radiation), Shapeshifting (Capable of disguising itself to match its surroundings), Able to alter its voice to mimic another’s, Fire Manipulation, Weather Manipulation, possible Time Manipulation (In The Arrival, as Lauren gets closer to Kate's house, the time of day seems to rapidly go darker, eventually turning to night as the player arrives at the house), Telepathy, Memory Manipulation, Immortality (Types 1 and 8; will always reform as long as a memory of him exists), Intangibility, Reality Warping, Stealth, Perception Manipulation (It causes Lauren to hear voices in her mind, altered her vision at the same time), Large Size (Type 0), Enhanced Senses, Immortality (Type 1 and 3), Disease Manipulation, Regeneration (At least Low-mid, can regenerate his arms and others parts of his body), Empathy Manipulation (Slender's presence can summon feelings as fear,, sadness or anger), Illusion Creation

Attack Potency: Varies between Wall level (Casually tears apart human beings and strings them up on trees), City level (Burn all the forest of Oakside Park) and High Universe level (Speculated that he is likely on the level of Godhood, being a fourth dimensional creature beyond our conceptions of power) At Least Multiverse level with [dimensional bleeding]

Speed: Possibly Omnipresent (Theorized to be everywhere at once until locked into a specific location via sight), otherwise Unknown (Seems to teleport around via Slender Walking through the 4th dimensional space around us), Peak Human attack speed (Using his tentacles can be more faster than a human)

Durability: At least Street level (Via his size)

Weaknesses: Similar to Pennywise, if every human being on Earth fails to believe in him he cannot return to life and is rendered weak; enjoys torture rather than instant death and allows enemies to openly defy him, although puts a stop to them if he perceives obvious threats.

Key: Base | The Arrival | Higher-Dimensional