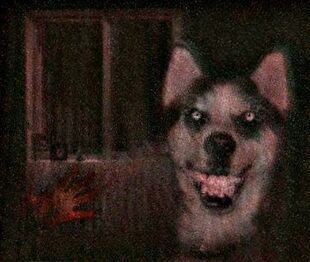 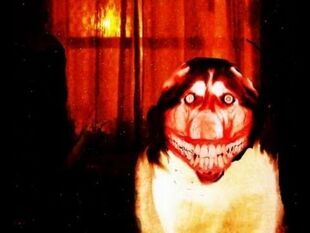 Smile Dog is a paranormal husky captured in a haunted picture that renders any viewers epileptic, comatose, or worse, suicidal, if they do not spread the picture to the best of their ability.

Powers and Abilities: Dream Manipulation (Plagues victims' dreams), Paralysis Inducement (In the dreams), Fear Manipulation (Causes hysteria, paranoia, etc,) Technological Manipulation (Forces itself through the internet), Mind Manipulation (Causes epilepsy and make the users to kill themselves if they do not spread it), Some degree of Morality Manipulation, Non-Corporeal, Clairvoyance (Able to know the direction of the victims to send to them the cursed image) Durability Negation via Suicidal Impulses, Social Influence, Can create diskettes

Attack Potency: Unknown, Can bypass the durability with his powers.

Speed: Subsonic with Mind Hax (He's faster than the human eye), Speed of Light via the Internet.

Durability: Unknown (Presumably will survive so long as photos of it exist, which means can only be destroyed by a purge of the internet). Being Non-Corporeal makes him difficult to harm.

Standard Equipment: The internet and The Image

Intelligence: High. Able to torture his victims and manipulate them to spread his image.

Weaknesses: Lacks a solid form (so to speak) and is generally held to be an internet entity.