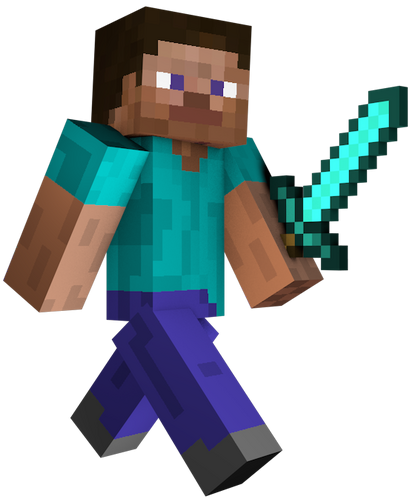 Steve, the main protagonist of Minecraft, is simply a survivor in the wilderness. He maintains no obvious backstory, leaving him and everything in the world of Minecraft up to the player- nothing is known about his life.

Attack Potency: At least Room level (Capable of taking down a Zombie with his bare hands, can punch through meter-thick planks and stone, albeit with difficulty for the latter) | At least Town level (Capable of fighting with the Ender Dragon, who can vaporize its own body size of steel in an instant), possibly higher (The Wither is superior to the Ender Dragon to an unknown degree), can bypass traditional durability with poisons and other potions

Lifting Strength: At least Class 25 (Capable of lifting a cubic meter of pure gold in one hand; note that his inventory is considered hammer space and not actual pockets) | Class 25

Durability: At least Room level (Can survive considerable beatings from various low-end enemies of the verse, including Zombies and Skeletons) | At least Town level (Can physically endure many strikes from the Ender Dragon and The Wither)

Stamina: High, with enough food he could presumably move endlessly.

Range: Up to dozens of meters with a bow, several meters with magic, otherwise melee range.

Intelligence: Above Average, understands technical setups and magical knowledge, among other things.

Weaknesses: Standard human weaknesses. Needs food to survive and is vulnerable to fire and poison without protective enchantments or armor. Falling from a certain height can also kill him instantly.

Key: Base | With Items