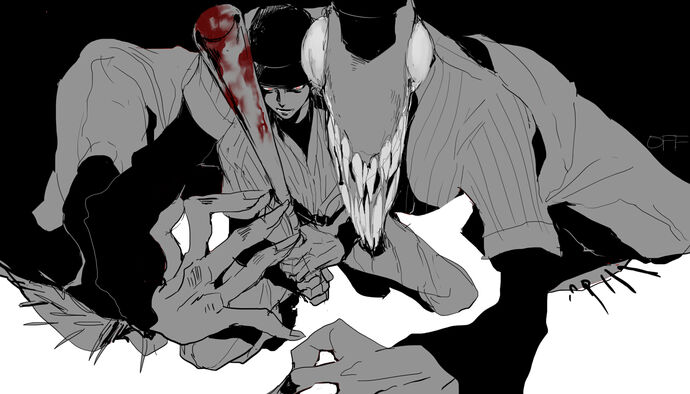 The Batter is a quasi-silent and powerful character controlled by the "Player" (AKA The Puppeteer). His overall mission is the ultimate "purification" (lit. erasure of everything inside) of the zones. He rarely speaks in long sentences and acts more like a tool than a human (in fact, he is not a human, although what he is, really, is unknown).

Speed: Probably Supersonic+ (Ran up a super-sized industrial chimney fast enough to reach the clouds) with Speed of Light reaction time (Manages navigating the Nothingness, a place where everything moves at the Speed of Light) | MFTL (Got to the Sun at 361.6 times the speed of light)

Lifting Strength: At least Class 50 (Pushes object that should be about this weight casually) | At least Class K+ (Should be equivalent in strength to Enoch, who can lift this by right of sheer size)

Range: Extended melee with various bats, up to planetary with reality warping

Standard Equipment: Various "Bats" (notably the Ashley Bat, which is the most powerful bat in the game), Add-Ons (Summonable allies represented as rings, Alpha, Omega, and Epsilon; all are nearly as powerful as him), Various pieces of Flesh (Top tier is Gold; restores magic power), various Tunics (Top Tier is Neil Tunic, which increases evasion), Tickets (Top Tier is Fortune Ticket, which restores considerable amounts of health), Joker Card (Revives himself or one of the Add-Ons), Belial's Meat (Removes all ill effects like poison and bleeding), Abbadons Meat (Fully restores all CP and HP outside of combat for the whole team), Eye (Used to fully analyze an enemy), "Symbols" that raise Attack Power, "Auras" that raise Defensive Power, "Colours" that act as secondary armor, various "Days" granting such advantages as: Resist Poison, No Terrain Damage, Avoiding Critical Hits, etc

Intelligence: At least Gifted overall, capable of easily outsmarting large groups of people and figuring out complex puzzles insanely easily, if not instantly (although often lets the player figure them out anyways), easily outsmarts entities like Enoch

Weaknesses: None hugely notable, although his CP (essentially his magic points) can run low in extreme cases if he is uncareful, extremely prideful

All of the Batter's (as well as those of his Add-Ons) attacks (AKA Competences) can be found here. Enjoy~

Retrieved from "https://vsdebating.fandom.com/wiki/The_Batter?oldid=27194"
Community content is available under CC-BY-SA unless otherwise noted.