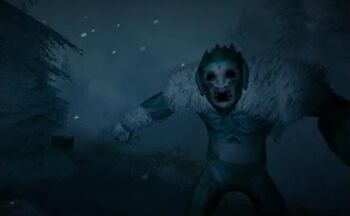 The Yeti Tubbie is a side character who appears in Slendytubbies 3 and appears in the mountains with its robot slave. It assaulted The Guardian in order to eat him but The Guardian managed to escape in time. It use to be one of the three teletubbies

Gender: Unknown, the voice indicates it to be female

Attack Potency: Wall level (Easily knockout The Guardian. Comparable to other infected who can easily mutilate regular teletubbies and rip heads off)

Speed: Subsonic+ (Rushed The Guardian before he can react, who can dodge rockets. Comparable to other infected who are capable of dodging bullets)

Lifting Strength: Class 5 (Comparable to other infected who can tear off heads)

Intelligence: Virtually Mindless (Has no higher brain functions beyond killing and infecting)

Retrieved from "https://vsdebating.fandom.com/wiki/Yeti_Tubbie?oldid=30982"
Community content is available under CC-BY-SA unless otherwise noted.