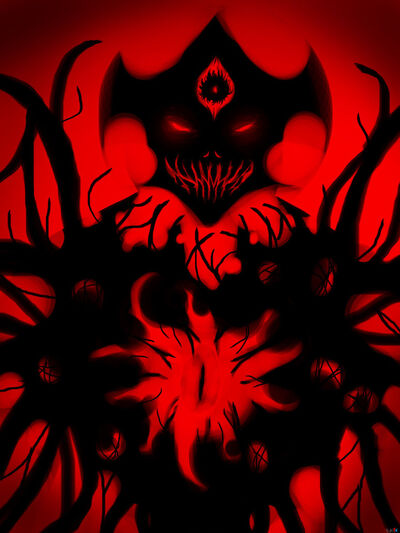 Z̤͂â̢ḷ͊g̹̓ȯ̘ (as he is most commonly referred to) is described as an entity of pure chaos, a creature of utmost terror.

He is known as "He Who Waits Behind the Wall" and the "Nezperdian Hivemind" in some circles. Very little is known about Zalgo and its desires, objectives, or even real form.

He is an eyeless abomination with seven mouths. His right hand holds a dead star and his left hand holds the Candle Whose Light is Shadow and is stained with the blood of Am Dhaegar.

Six of his mouths speak in different tongues. When the time is right, the seventh shall sing the song that ends the Earth.

Only one thing has been made brutally clear- it is he who will cause the eventual destruction of Earth.

Tier: 5-B via The Song of the Soul, at least 4-C physically

Name: Z̤͂â̢ḷ͊g̹̓ȯ̘, He Who Waits Behind The Wall, The Chaotic Nezperdian Hivemind

Gender: Genderless, normally referred as "He"

Age: As old as the Chaos itself

Powers and Abilities: Superhuman Physical Characteristics, Soul Manipulation (Can possess, devour, and remove the souls. His Song of the Soul is able to devour the entire souls of a planet), Mind Manipulation (Can confuse people's minds, make them act erratically and generate morbid thoughts, or even lead someone to suicide), Madness Manipulation (Type 3, his mere presence is able to lead someone to the vortex of madness), Chaos Manipulation, Corruption (Type 3) & Reality Warping (His main ability is the power to use the chaos to warp reality and make unwhole the world and everyone within his influence. He is able to corrupt the very fabric of reality and its inhabitants, warp the reality to generate disorder such change the weather, glitch entire spaces and beings, destroy everything, or bring the chaos and leave a place without order), Spatial Manipulation (Can warp and change the space in which he is), Possession, Transmutation (Transmuted characters in various comics to turn them into shadowed creatures), Non-Corporeal & Abstract Existence (Type 1, exists solely as a chaotic hivemind, a notional entity that exists as an abstract idea rather than a physical being as well. It's stated that summoning Zalgo is summon the feeling of chaos itself), Conceptual Manipulation (Due to his nature as an abstract being existing as the idea of chaos. He also seems to be able to remove the concept of order from the place in which he is, or made armors carved on the suffering of mothers), Immortality (Type 1, 3, 8 & 9, As long as the chaos exists he will exists. It's stated that he cannot be stopped, as fear cannot be stopped, and that he is inseparable of reality, as he exists beyond the veil, which implies that Zalgo's true self exists in his own dimension of darkness), Regeneration (Mid-Godly, he is inseparable of reality, and it's needed to destroy it to erase Zalgo form the plane in which he enters. Even so, he will return in his Realm of Chaos), Enhanced Senses, Telepathy, Darkness Manipulation (Capable of obscuring the space where he is), Shapeshifting, Blood Manipulation (When he appears the blood falls from the walls), passive Biological Manipulation (Everyone near Zalgo's presence would suffer alterations on their bodies, such making them grow tentacles, removing their eyes and causing them to bleed, make the bodies melt, etc), Multilingualism, Musical Manipulation (Can sing a beautiful and incomprehensible song that can destroy planets and generate chaos), Summoning (Can call a beast that devour souls and his undead legions), Necromancy (Forged his legions on the tears of sleepless dead), Dimensional Travel (Can travel between dimensions and manifests his powers between them), Large Size (Type 5), Size Manipulation, likely Nigh-Omnipresence, Creation & Pocket Reality Manipulation (Creates dark tentacles when he appears, and it's implied that he created his Realm of Chaos), Pain Manipulation (Removes the ability to feel anything but pain), Illusion Creation, possibly Fear Manipulation, possibly Fate Manipulation (States that he would lie and rape "through this curled fate". Whether this can be taken literally or if this is something made by his power it's unknown)

Attack Potency: Planet Level via The Song of the Soul (When the time is right, his Seventh Mouth would sing the song that ends the Earth, destroying the planet and devouring the souls in it), at least Star Level physically (Holds a dead star in one hand, which is a white dwarf. The regular stars are the ones that eventually die, and even if their actual sizes are smaller than a regular star, it has the same density as a regular star), can bypass conventional durability with his powers.

Speed: FTL+ (So big enough to hold a death star in his hand), Likely Nigh-Omnipresent (Implied to be within every living being as a sort of natural philosophy or ideology, behind the walls of our souls)

Lifting Strength: At least Stellar+ (Casually holds a star in one hand and a candle of similar size in the other)

Durability: At least Star level (Implied to have fought and defeated an entity similar to himself referred to as Am Dhaegar), being an Abstract being inseparable of reality makes him difficult to destroy.

Range: Planetary (Capable of casually destroying Earth with his voice), 72,000,000 (72 million) miles physically (If comparable to a human being in body structure and the dead star is comparable to something like a baseball for him, then his arm scales to being 72 million miles long, assuming this is an average sized star), likely Multi-Universal (Can affect our dimension from his realm)

Standard Equipment: A candle whose light is shadow, A dead star, the legions he can summon in battle.

Intelligence Elder knowledge, able to speak in different tongues and his intelligence is beyond far mortal comprehension. Also rules his entire dimension.

Weaknesses: Requires permission from a human to manifest himself (although more than enough exist, and can use mind control/manipulation to force this on a human), None notable beyond this.

Note: This profile is a composite version of the character, which includes the following sources:

Keep in mind that the reason why these sources are taken is because they are the ones that are closest to what Zalgo's concept is, apart from having helped to some extent to its legend expanding.

Any other story or character data that is not related to the above mentioned sources will not be taken into account in this profile, so avoiding several problems or contradictions that can be generated due to the large number of authors who have their own idea of what is Zalgo.

Unicron (Transformers) Unicron's Profile (Both were 5-B)